I found myself falling back a lot on my fine arts training for the sketchbook project. Without thinking about it I chose to draw almost exclusively from life, something that was always stressed in my drawing classes, and in graphite, my medium of choice for undergrad. I’ve excluded all the project sketches and notes from this collection, as I wasn’t making them with this exercise in mind.

I didn’t enter this assignment with any real plan, except to draw what struck my fancy on any given day. Looking at all the drawings together it’s easy to see them as a record of where I spent my time. There are several drawings of the kitchen table, wine bottles and glasses, and home interiors. It’s probably not surprising that there’s a view of water towers from my office or a lot of plants in my apartment.

I enjoyed this assignment, but I did have trouble remembering to do the drawings every day. I would often find myself doing them in twos and threes as I was making up for missed days.

Viniyata and I partnered up again for the second animation assignment. We ran through a number of ideas for this project, from a riff on the little mermaid to a hypnotic pocket watch pendulum. Eventually we settled on something using DaVinci’s Vitruvian Man. The drawing seemed like a good way to explore animating the human form, without having to invent a character. It also allowed us to explore shapes and patterns, which seemed pretty cool.

Cutting up the Vitruvian Man into parts was straightforward, but tedious. I thought of him like a paper doll. I spent quite a bit of time duplicating layers to separate each arm, fore arm, and upper arm into three distinct pieces. It was the same process for each thigh, calf, and foot. After cutting everything up in Photoshop, I took everything into After Effects to test it out. The figure needed a lot of adjustments, and that also took a fair amount of time.

Something that we hadn’t considered when we first picked the Vitruvian Man is that only one of his legs can really bend, due to how they are positioned in space. I solved this by mirroring the leg that can bend. This looks a little silly, but you can’t really tell in the animation.

I created the figure’s animation by with rotations and parent/child pairings. I was trying to keep the motions angular and ‘mathematical’, but also make them seem human. I think that works. After finishing the figure animation I handed the composition off to Viniyata.

When Viniyata and I met to shoot our animation, it became clear that our original idea was not feasible to shoot on the floor. So, we quickly reconsidered what the strengths of our idea were and considered what we could do with them. We realized that we had not one, but two charismatic little monsters. We also had the fact that we were learning stop motion animation.

We decided to combine those two facts and create an animation about the animation process. The sequence would include us setting up the stage, adjusting the camera, and beginning to animate the first monster. Then, the second, larger monster would eat the first, as new ideas consuming the old. Finally, the larger monster would lunge at the camera, turning on its creators.

This was a lot of fun to shoot, even though we had a couple of problems. The little monster was not designed to bear any weight, to having him old things mean that his arms would slowly move as we were shooting. Also, the large monster wasn’t designed to walk, so making that animation was tricky. However, in the end I think the animation was pretty successful. 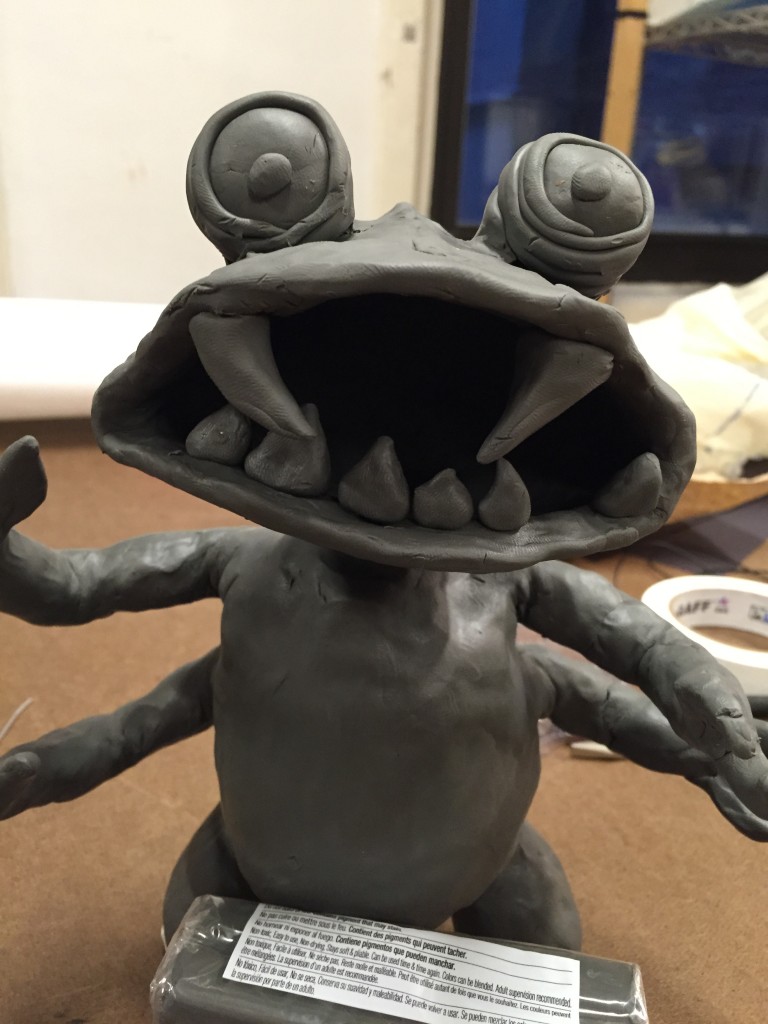 I built a bigger better monster based on our clay sketch. I built him from 16 and 22 gauge armature wire, gaffers tape, clay, and other miscellaneous items I found in my apartment. The idea was to put a gaffers tape skin over the armature, and then cover it in clay. That way the monster would be lighter and have a good range of motion. Also, the monster’s feed and torso were weighted with sand and rocks to give more stability. 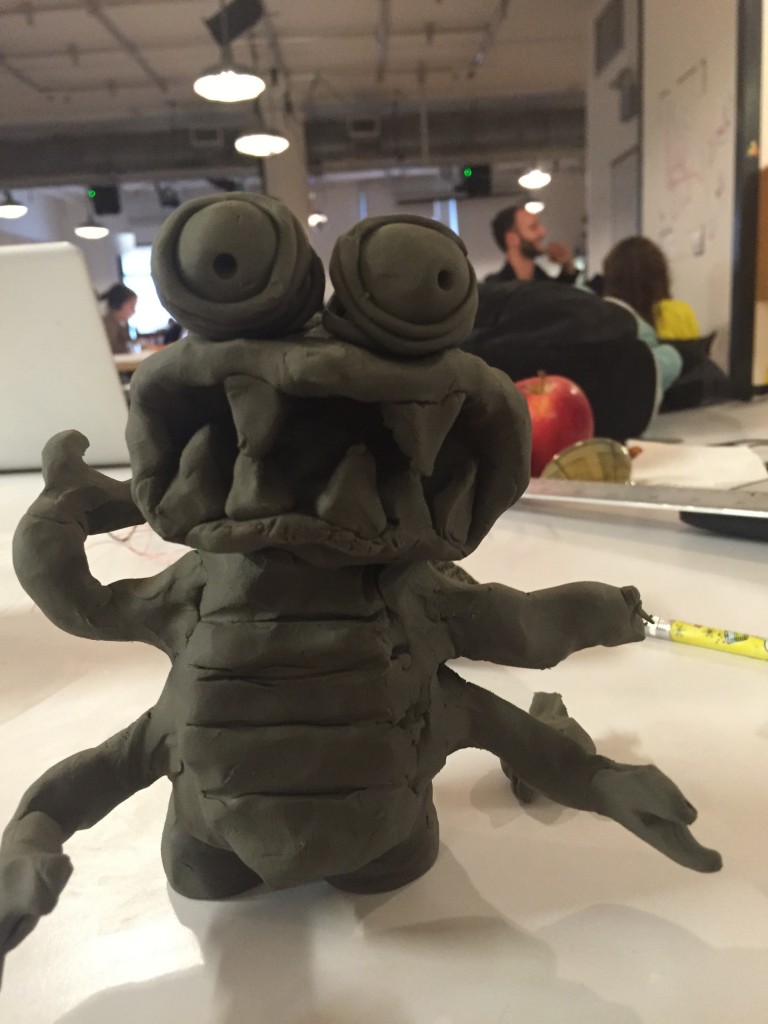 Vinyata and I put together the prototype monster together. We sketched him out in plasticine clay. The idea was to create a monster that was not too cute.

Some of the images we used for inspiration were: